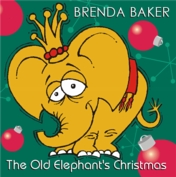 To find out more about the next public performance or about booking The Old Elephant’s Christmas for your school, church, Christmas party, or other special event, OR for reviews of the show Â click here 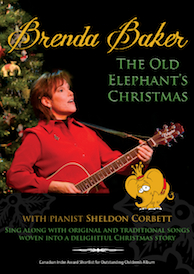 This story has been a part of my life in one way or another since 1980 or so, when I wrote the first version to entertain my family during the holidays. In 2001 it became a story-song CD and was shortlisted for Outstanding Children’s Album – 2003 Canadian Indie Awards. In December 2007, a TV version began airing every Christmas on SCN. It was also picked up by MTN (Manitoba Television Network). And as of 2010, you can now buy it on DVD — a performance taped live in front of a studio audience. I’ve played the DVD for groups of kids and have been amazed at how they really get in to singing along and doing the actions, even though I’m coming to them through a TV screen! (Scroll down for video clip.)

What’s the story about? Well, here’s what’s on the back of the CD: “The Old Elephant’s Christmas weaves together familiar carols, original songs and a beautifully narrated story written by Brenda Baker. Through Brenda we meet Penelope, a girl who loves perfection. One Christmas, while decorating the family tree, Penelope decides there’s one ornament that’s too imperfect for her otherwise perfect tree: the old elephant. After seventy years of spending his holidays swinging on a branch, Old Elephant is left in a box, where Christmas becomes very sad indeed. As the tale unfolds, he comes to understand the special love of his family, and Penelope comes to see that beauty is often in the eye of the beholder.”