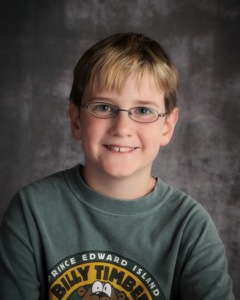 In December 2008 I went to The Old Elephant’s Christmas in Regina. It was a great musical about an elephant that was not loved by a girl. She thought the elephant was ugly so she hid the elephant in a box. But the other ornaments thought he was beautiful, but they did think he could use some fixing up, so all of the ornaments made him look beautiful. It looked like he was brand new. It was a great musical!

It was a good musical because Brenda Baker used expression when she talked, let the crowd sing along with her songs and I liked how the elephant looked brand new after Brenda said the ornaments fixed him.

Overall it was great. It was very enjoyable to watch and sing along with some songs.

I liked that she sang the “Megamunch” song at the end.*

*Brenda’s note: Because this event was at the Royal Saskatchewan Museum where Megamunch lives, this finale was by special request!