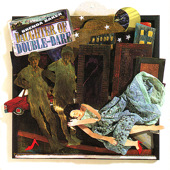 A few months ago I heard Brenda Baker being interviewed on CBC Radio’s Afternoon Edition. They played two bright, wickedly satirical tunes from her new CD. Both were about being a feminist with a sense of humour: The F-Word and Call Yourself a Woman (“or they’ll treat you like a girl”). Then the host asked her if she was angry. Baker got a bit, well, peeved.

You could hardly blame her. That sort of labeling — “angry feminist songwriter” is what The F-Word ridicules so effectively: “The F-word isn’t nice. The F-word hurts your ears. The F-word makes our decent girls burn their good brassieres.” (The F-word, if you haven’t guessed, is Feminism). The CBC producers, apparently, hadn’t got it.

That’s a shame, because in trying to fit her into a neat slot, they missed a diversity of musical and lyrical styles that is one of Daughter of Double-Dare’s chief virtues. They also obscured the fact that, even on the two songs they played, Baker is about 10 percent deadly serious (“The F-word is the proof that we’ve caught on to Patriarchy. Hee-hee.”), 40 percent tongue-in-cheek (“Sure we want our rights but we don’t want to be mean”), and 50 percent uninhibited musical fun. The girl-group harmonies, with all the irony that style adds to Call Yourself a Woman, is a good example. If you had to describe the songwriter in a phrase, “fun-loving feminist” would be as good as any–and just as misleading. Somehow, I doubt that the media will latch on to it.

In short, there’s hardly an “angry feminist” song on this CD (Bye, Bye Becky, about a pregnant teenager who dies rather than tell her parents, and Whatcha Call Insane, about the Montreal massacre, come closest), and there is not one Brenda Baker voice here, but many. Like most great songwriters, she’s adept at putting on a different mask with each new piece. Besides the self-mocking, “opinionated” feminist quoted above, we find a vulnerable ex-lover bruised by her own imagination (This Room). There’s an aging romantic who wishes she’d traded a rose for a kiss on a Barcelona Bridge. There’s a gossipy, cool-while-the-supper-burns, telephone, persona (Man of My Dreams). There’s a surprisingly dispassionate reporter on the dreams of a teenaged prostitute (Cindy). And there are half a dozen others, too (the CD has 18 tracks for the price of 12).

Not only are there many voices on Daughter of Double-Dare, but many ways of telling. Some of Baker’s “chat-raps” seem like the extended monologues of stand-up comedians. Others seem like literary stories (two were published as such in Malahat Review). The title track fuses the sensibilities of a cyber-punk narrative, a Wonder Woman comic book, and a serious ecological warning. As Daughter of Double-Dare seduces a soldier on the yellow line of a busy street, the haunting chorus draws the listener back in a long shot to “the scars of the Man in the Moon and the Men of the Stars. Rage must release her from their curse. They think they own the universe. She’ll give them a little scare….” How scary is this? You could be surprised.

At the opposite end of her range, Baker is just as good with protest songs of the sort Pete Seger and Malvina Reynolds used to write–chilling lyrics over lovely melodies and messages like “War is bad” (What We’re Capable Of) and “freedom will endure” (Letter By Letter). These are old messages, but every generation seems bent on learning them the hard way, as the former song points out. “Do you hear a slight hiss in that politician’s kiss as he sucks on the blood of his decision? How fast will it go? How thick will it flow? Uncovering the lessons we already know.” These are lyrics that make old messages new again. With luck, these songs could be passed to hopeful children and sung to future generations who try to forget.

But luck isn’t something Baker wants to count on to get her songs heard. Tired of giving away all the profit to record distributors to get her CD into the big chain stores, Baker is experimenting with a mail-order distributor (call 1-800-Joe-Radio) who gives a bigger cut to the artist, and with her own marketing ideas. She’s running contests, networking by fax and modem, and collecting names for a mailing list so she can “wait for technology to catch up: the day when people have fax in their homes.”

“It’s still frustrating,” she says. “You get a nice article [printed about the CD] but they don’t say how to get it. What’s the point if no one knows where to buy it?” So here’s where: Brazen Hussy Records, 404 Tenth Street East, Saskatoon, SK. S7N 0C9.

In 1994 Rod Macpherson was teaching English at SIAST, was a member of the Saskatchewan Playwrights Centre, and of the NWR co-operative, and no doubt still plays a mean guitar.