and other singable songs 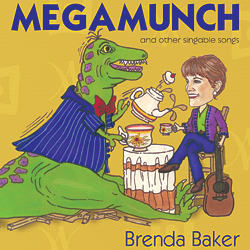 This is my top-selling CD. (And it still sells! Even without touring nearly as much as I used to.) It’s at the top partly because it’s been around the longest, but also because there’s something about it that just caught on with folks, young and old alike. It was recorded in Regina, Saskatchewan, pretty much “live off the floor” with a fantastic producer, Rob Bryanton, and wonderful musicians. Rob has since gone on to build his own sound company (Talking Dog) and his work is heard internationally now on TV shows like Corner Gas or movies like Prairie Giant: The Tommy Douglas Story. Musicians included the likes of Bob Evans (2003 USA National Fingerpicking Champion) and Jack Semple (Guitar Warz Canada winner 1992). The Number One comment I’ve had time and again over many years about Megamunch is, “It’s our favourite, especially on long car trips!” It was released in 1990 on cassette tape, but in 2004 I gave it a new cover and re-released it on CD.